As of November 9th, this user has left the Fandom of Pretty Cure wiki!

Yousei A. Sina「洋成ア・シーナ」is the pen name used by FairySina. Sina is the creator and owner of the Sky Pretty Cure series and Sky Pretty Cure generations as well as the creator-sister[1] of the seasons' Cures. She is known as a hobby artist and novelist and has started some other projects or has supported other people's project with her art. Yousei A. Sina is sometimes referred as "Y.A.S." (ヤッス, Yassu?) since the complete name is a bit long.

A (ア, A?) - A is the initial letter of FairySina's actual given name and stands for Anne-chan (アン姉ちゃん, Anne-chan?). "Anne-chan" is the name Yousei A. Sina would be called by her characters, which is a combination of the name Anne and the Japanese "Nee-chan", which means "sister".

Sina (シーナ, Sina?) - Sina is the second part of her username on Wikia. Sina is a possible short form of the names Rosina or Teresina, which might mean "rose" or "summer". 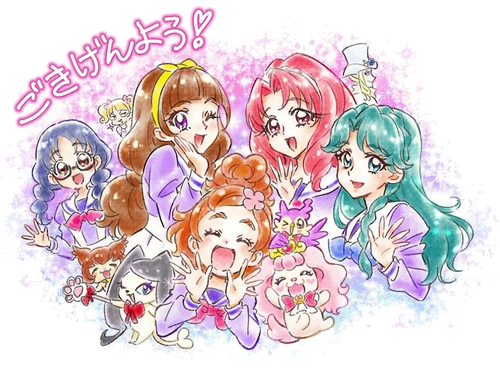 Gokigen yo!!
Retrieved from "https://fandomofprettycure.fandom.com/wiki/Yousei_A._Sina?oldid=229819"
Community content is available under CC-BY-SA unless otherwise noted.