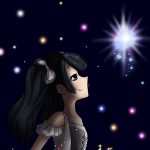 I'm Millyna, the creator of Network Pretty Cure and Loyality Pretty Cure. I've started watching Pretty Cure around HappinessCharge! PreCure's 12th Episode but I've also watched other series. My favourite Series is Suite♪ PreCure and as well Go! Princess PreCure and my Favourite Cure Cure Echo (and probably also Cure Scarlet because my favourite Seiyuu Sawashiro Miyuki voices her). I'm a fan of J-Pop, esspacilly of AKB48 and all other 48Groups and Nogizoka46. My favourite anime overall is AKB0048, followed by Pokémon and then Pretty Rhythm and Pretty Cure.

A thing, I want to comment, thanks to FairySina for improving my character template^^

50 years, since the Network was taken over by the heads. The network is a world in computers, created as a "game" for the humans. Now, the network has new masters, called heads. But one day, things started to become crazy. Monsters called 'Uritchi' attacked our world, a virus from the network. But the connection couldn't be stopped anymore. Soon, the human world was controlled by the heads.

My first series which is inspired by the PV of a song. It's about friendship, connection and trust and it's main theme is (obliviously) computer and social networks.

The kingdom Aya has got a war with it's neighbor, Namida. To protects the kingdoms 4 princesses, the queen has send them to live as ordanary people, only their brother, crown prince Leon stays with his family. Together with their loyal maid Akari, they learn about a the legendary warriors and their powers but also about the past of Akari which seems to be more then thought...

My second series, inspired by Fire Emblem: Fates (or more a dream I had about it). Like Go! Princess PreCure, it's about royality but also about siblings/family relationships.

Retrieved from "https://fandomofprettycure.fandom.com/wiki/User:Millyna?oldid=112628"
Community content is available under CC-BY-SA unless otherwise noted.