Bonjour and Welcome to my User Page~!

Hi, I'm Hickmanm or Chinatsu Kiseki~ I'm a 16 year old girl studying professional cookery and training to be a patissiere/pastry chef. Due to this, I have a strong passion for baking and cooking and I want to open a patisserie as an adult. I also have a creative writing talent and I love to sing also.

I am also on the autistic spectrum, having Asperger's and meaning I struggle to interact with others.
More Info about me:

I was first introduced to Pretty Cure when my younger sister introduced me to a Pretty Cure Dress Up game in around 2014/2015. I got addicted to the series of games and learned that Pretty Cure was actually a franchise.

I first started writing fanseries while Happiness Charge! was airing. The series I started writing was Flower Precure, where the Flower Kingdom is under attack from the Flower Destroyers and May Richards was given the power to transform into Cure Tulip. She was joined by her best friend Stella Davis, Natalie Hill and Jessica Dixon. The four were then accompanied by Serena Richards, May's missing older sister, Olivia Smith and the mascot Daisy who had the power to transform into Cure Clover.

I then started to write other series, eventually coming to December 2016 where I created the Floretta Pretty Cure! Series.

I was first introduced to Pokémon during my third year of school (Year 2). My friend gave some Pokémon cards and I learned that Pokémon was a whole franchise. I then got several Pokémon games and played them (but I never managed to beat the Elite 4 until XY and ORAS). I can't wait until Pokémon Sun and Moon as I'm getting them for Christmas!

Okay, I have to admit it: I'm a huge fan of Symphogear!!~~
It is one of the best anime ever and I'd totally recommend it~ And if you don't know what Symphogear is... get outta town. I'm just kidding, I'll tell you the plot those who don't know; here it is:

Two years ago, a pair of idols, Tsubasa Kazanari and Kanade Amou, collectively known as Zwei Wing, fought against an alien race known as Noise using armor known as Symphogear. To protect a girl named Hibiki Tachibana, who got severely wounded by the Noise, Kanade sacrificed herself. Two years later, as Tsubasa has fought the Noise alone, Hibiki ends up gaining the same power as Kanade.

My Review on Symphogear

Symphogear is literally one of the best anime I've ever watched. The story was laid out amazingly and the characters were awesome.

Starting off with the story, it was truly awesome. So, the story basically starts with ZweiWing performing a concert, but suddenly the Noise attack and nearly kill the protagonist however, Kanade sacrifices herself using her “Zesshou” to save Hibiki’s life. This is, truly, an amazing way to start off the story as it introduces the viewer to the main characters but also creates an uneasy and upsetting atmosphere.
Then, as the story continues, Hibiki (now with Kanade’s power) and Tsubasa encounter Chris Yukine who uses the Nehustan Armor but later the relic Ichaival. (I’m really trying not to give any spoilers) And later (AKA the final episode) they sacrifice themselves to stop the chunk of moon from destroying their town, only to have faked their death in order to protect their friends. This made me cry so much ) ;

Now going to the characters, let’s start off with the main protagonist: Tachibana Hibiki. Hibiki, two years ago, nearly died due to the piece of the Gungnir Relic entering her heart tissue. Hibiki is one of the coolest I have seen in an anime, however, she can be rather annoying. Then we go to the veteran user of the team, Kazanari Tsubasa. Tsubasa, before Kanade’s sacrifice, was originally shy and introverted but usually depended on Kanade to lift up her spirits. Then, after Kanade’s sacrifice; Tsubasa became, how she describes, “like a sword” being cold and independant. I find Tsubasa really cool, and now we go to the most awesome of the team: Yukine Chris! *gives Chris a medal for being the most awesome Symphogear character in existence* Chris is truly pure awesomeness.

And then finally: the music The music in this series has no other word to describe it but utter awesomeness. By the way, Chris' songs are the best; no joke, like, listen to the ignited version of TRUST HEART, it's the best!! Here an hour version for ya'~ 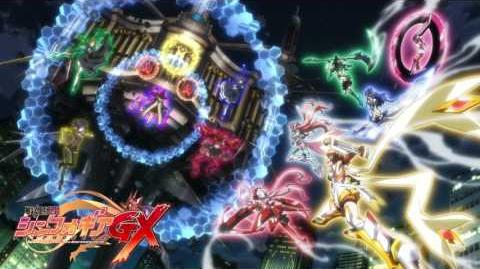 And here is a vast array of Symphogear GIFs (mainly of Tsubasa and Chris-chan):

And if you want to see my Symphogear fanseries, please go here

I have created several fanime, here they are:

Community content is available under CC-BY-SA unless otherwise noted.

Ranked #6
on this wiki