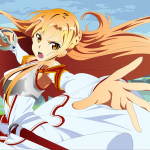 Hi! I'm Aisu Shironami or you can call me Aisu (it's not my real name tho). I love many animes. Feel free to talk to me if you'd like to discuss something!

Also, I'm pretty active on myanimelist, so check my profile and perhaps we got same taste in animes! Click here for my profile!

How I Know Pretty Cure

I was introduced to Futari Wa Pretty Cure by my cousin who live in another country. I watched Futari wa and Max Heart with her when I was little.

Years after that, I was in a holiday for a very long time and got really bored. By accident, I found a Pretty Cure dress up game and triggered about the particular series. I searched and found the wiki. I was shocked, thrilled and amazed when finds out that precure has widened into many series after Max Heart. At first, I only planned to watch the futari wa and max heart, but after seeing the other series, I need to watch them all and find one that interest me. I first watch Smile, then Yes! 5, and so on with no order.

Max Heart precures are always my favorite. It's the original and first ever pretty cure series and I love the plot. Smile is also amazing since its about fairy tales and I'm really into it. Precure 5 and Doki Doki also my faves because I love how both have some romance on it like Nozomi and Coco, Syrup and Urara, Nats and Komachi, Rikka and Ira. I love suite because its all about music. Music is my life and I'm really glad they made a series about that. Go! Princess is very children-like series, but I find it really cute and the designs suits my style.

My favorite cure of all is Cure Scarlet. I never actually have like one idolized cure before until I watched Go Princess. I love her character so much. She's strong and gentle at the same time. Although she used to be a villain, she never let her dark times haunt her. I also like Cure Passion and Cure Beat.

I love all cures from Max Heart because both are my childhood and I adore Cure Black and Cure White. I also love Milky Rose, Cure Diamond, Cure Twinkle, Cure Felice and Cure Heart. Especially Cure Diamond, sometimes she reminds me of myself when I watched the episodes where she's confused about her dream. Though I do not want to be one, how she feels about it reminds me of my own.

I really love the fairies! My all time favorite must be Syrup. He's so adorable and caring, but a bit rebellious. Now that's a good mix-up character for the fairy. Plus, I really like Syrup's human form. I personally think he's cute. Syrup might be my first ever fairy that I like. I also love how he really care about Mailpo and how Mailpo really loves Syrup.

Pollun is also the cutest fairy ever! He's a crybaby but he want to protect his friends. I just think that he's super adorable. Milk also one of my favorites. She's cute but a little cunning yet innocent. That's why Milk and Milky Rose are one of my favorite characters.

Majestic Pretty Cure! is my first and only series. Originally, this was made in 2015. But I kinda leave it for almost a year and when I came back, I decided to change up everything. I change the plot, characters, images until it become the series now.

Though it says to air in April 2016, I only perfected 4 episodes by the end of 2016. Perfect means it has the airdate set, images and transcript. So, it will still go on but slowly since I'm also a busy person. The full story is already in my head, complete. Just need to poured into writings.

Season 2 is planned. Since I 'completed' the series in my head, I started to plan for a season 2. There will be new costumes, new cure, monsters and others. Stay tuned cause this will be launched after the current season finished. IS ALREADY HERE!

Although its not finished yet, or even started until the first season almost complete, CHECK IT OUT! Majestic Pretty Cure! Regal

Arcana Pretty Cure! is a brand new second series I'm working on. This is first created in 2017. I do know that Majestic Pretty Cure! is still on work and need to be completed soon, but I want to start another series for refreshments so I won't stuck in one series.

Arcana Pretty Cure! is inspired by many anime I have watched for the time being. I got inspiration from anime such as Arcana Famiglia (surely from the name and some aspects), Nagi no Asukara, etc. This season is supposedly air after the first season of Majestic Pretty Cure! series.

Arcana Pretty Cure! is being remade. I think that the first time I create this I feel really good about it. But then, I want to have a series that is not like the usual PreCure series. I want a more dark, mature and mysterious story. My previous theme did not suit what I wanted it to be, so I remade 99% of this series. Its inspired by some of my favorite (or not favorite, but a good one) anime such as Sword Art Online, Owari no Seraph and Bungou Stray Dogs.

I love watching other anime. I don't have specific genres to watch, I watch as long as I like it. But, I enjoy watching Romance, Mystery, Thriller and Shoujo/Shounen. You could check my profile in myanimelist (link on top) to know what I have watched, like, and planned to watch.

Other than that, I love reading novels. My all time favorite book is School for Good and Evil trilogy. It was so good. I also enjoy House of Secrets, Secrets of Nicholas Flamel, Bad magic, etc.

Retrieved from "https://fandomofprettycure.fandom.com/wiki/User:AisuShironami?oldid=229312"
Community content is available under CC-BY-SA unless otherwise noted.