Tomoka Fukumoto (福本ともか Fukumoto Tomoka) is one of the main Cures in Fairytale Pretty Cure!. She is a shy, yet kind-hearted and intelligent 14-year-old girl. She is a second-year student at Minwa Academy and Vice President of the Student Council alongside Masato Kashima, her childhood friend and secret crush. She is called the "Ice Witch" at school, mistakenly considered cold and intimidating but is actually highly sensitive and insecure. She has a habit of saying "So embarassing!" (恥ずかしいです! Hazukashīdesu!) when she gets overwhelmed or anxious.

Before the start of the series, Tomoka was just growing out her hair and her bangs were in her eyes.

At first glance, Tomoka seems like any other rich girl with a cold and intimidating aura to match her silver spoon intelligence. However, with Tomoka, you would be wrong. In reality, Tomoka struggles in most social situations and is extremely socially awkward to the point that she has troubles expressing herself and making new friends. She is very self-conscious, sensitive, and anxious girl who is prone to have fits of embarrassment when caught off guard.

But, once Tomoka comes out of her shell, she proves to be modest, soft-hearted, loyal, and a bit of a helpless romantic.

Once becoming a Pretty Cure, Tomoka proves to be the voice of reason on her team and most mature in handling the stress of battle. She understands the importance of working together as a team and can at times be a bit headstrong, as she won’t hesitate to call out one of her friends if she feels they are in the wrong. Tomoka has grown to become more forthright with herself and her feelings and opinion without feeling insecure.

Tomoka's lowerclassman and "Club Flunk" Imari Suzukawa knocks into her. They both lose their book bags in the fall and accidentally get each other's bag. Even Tomoka gets home, she is beyond surprised to see a fairy named Bukku pops out. When Tomoka searches through Imari's bag, she finds her PreHeartBook and the fairy prince reveals that Imari is in danger without the power in the book to defend herself. Tomoka and Bukku jump into one of her limousines to go find Imari before it was too late. Tomoka reveals that she understands how important the situation. That Bukku cares for Imari like she cares for her older brother. Suddenly, an Endingu attacks the limo. Linda appears and informs Bukku that she had transformed Imari into an Endingu Puppet. As the Endingu Fable tries to capture, Tomoka jumps in to save him and unlocks her PreHeartBook. She transforms into Cure Mythical, the Story of Wisdom.

After she first became a Pretty Cure, Tomoka is in a sense of denial that all of it actually happened and that Imari was Cure Fable. She and considers it to be a dream until she finds her PreHeartBook inside her book bag. Once she gets to school, she gets an even bigger wake-up call when Imari shows up to school with Bukku completely visional; claiming him to be a stuffed animal. But, as Imari tries to act all buddy-buddy with Tomoka, her childhood friend, Masato Kashima, cuts in and puts Imari in her place. Trouble into ensues when fellow classmate, Tsubaki Nīmi, stands up for Imari and starts to argue with Masato. Things go from bad to worse when one of the Dark Charm Knights appears and attacks the school with an Endingu. While Imari transforms into Cure Fable, Tomoka is too afraid and does not. When Cure Fable is in a pinch and begs for Tomoka's help. At the same time, Masato is ordering her to come into the school where it's same. In a moment of fear and pressure to make a decision, Tomoka decides to go with Masato. She only comes to regret this decision, but when she tries to transform and save Cure Fable, the PreHeartBook refuses her. Tomoka realizes that she had lost the ability to become Cure Mythical.

Tomoka becomes depressed after losing her ability to become a Pretty Cure and loses the confidence to believe in herself. She hears that Imari had become over to her house with a box of cakes to try and mend their friendship, but she kicked out by her father, Moriki. In a fit of rage, Tomoka manages to find Imari's house to apologize for her cowardice to only be welcomed with open arms by the Suzukawa Family and was invited to stay for dinner. Tomoka learns how different Imari's family was from her own. But, the moment was short-lived when the Endingu attacked. Without the power to transform, Tomoka runs away and is chased by one of the Dark Charm Knights. When she is cornered, Bukku tells her that everything would be alright and that he would protect her. At that moment, Tomoka realizes that even though she doesn't believe in herself, she could still put faith in others and decides to put all her faith in what Imari and Bukku believe. Along with that, she also finds something worth protecting; a family's love. Her PreHeartBook unlocks and Tomoka becomes Cure Mythical once again.

Imari Suzukawa - Tomoka was one of the only students who didn't think Imari was as bad as everyone else in Minwa Academy. At the same time, Imari could see the kind heart that was locked away behind Tomoka's intimidating persona. When she learned that Imari is Cure Fable, she was in complete shock and didn't know how to face her at school. In Episode 14, Tomoka learns to put all her faith in Imari and hopes that she will become a teammate that Imari deserves. Tomoka has a great amount of respect for Imari and they have become close friends. In Episode 28, Tomoka states that she sees Imari and Nijiko as her best friends.

Nijiko Ōmitsu - Nijiko is Tomoka's upperclassman and fellow Pretty Cure teammates. Tomoka knows all about her reputation and is a bit of a fangirl. However, they don't become quick friends. At the start, Tomoka is annoyed with Nijiko's lone wolf approach in battling Endingu and not working together with her or Imari. But, when Tomoka learns more about Nijiko and how she was just trying to impress them. Although Tomoka and Nijiko tend to buttheads, they have become close friends to the point that Tomoka calls her and Imari her best friends.

Bukku - Tomoka seems to be the most understanding towards the young, fairy prince since she too was born into a high-class position. Until she can gain a confidence in herself, she believes in him. They connect on a deeper level and can easily let down their guard with each other. In Episode 14, Tomoka asks Bukku if he would want to stay at her mansion to feel more at home and he accepts her offer. She is the only one allowed to call him Fairy-san, which basically means "Mr. Fairy". In Episode 20, Tomoka now calls Bukku by his first name, cementing their close friendship.

Masato Kashima - Tomoka's childhood friend that knows her true self and accepts her flaws, as she does with him. Tomoka is also not afraid to call Masato out when he's being rude and too harsh. They are comfortable around each other and can open up about problems they are facing with the other always being in their corner. However, Tomoka has shown to get easily embarrassed around Masato and appears to harbour a secret crush on him. Tomoka has also been hiding the fact that Masato is also secretly her butler.

Tomokazu Fukumoto - Tomoka and Tomokazu were very close when they were little kids and she affectionately calls him "Kazu-oniisan". But, after Tomokazu was disowned by their father for wanting to pursue music instead of becoming a doctor, Tomoka lost contact with her older brother and hadn't seen him in two years.

Toshihiro Fukumoto - Tomoka and Toshihiro were close when they were little kids and affectionately calls him "Hiro-oniisan". But, after Toshihiro graduated Minwa Academy and went on to medical school, Tomoka didn't see much of her elder brother.

Moriki Fukumoto - Tomoka has a fragile relationship with her father. All her life she has done what he wanted her to be; intelligent, graceful, and strong. However, Tomoka struggles with getting her true feelings across to him and is never allowed to go or do what she wants which greatly enrages her. In Episode 14, it is revealed that Tomoka only wants to become a doctor because it's what her father wants her to do and she wants him to notice her. But, Tomoka shows a secret rebellious-side and tends to disobey her father and has been skipping classes since she goes to them only to make her father proud. In Episode 26, however, Tomoka tries to stand up to her father, but only causes a bigger strain. In Episode 27, Tomoka comes to understand that she got her insecurities from her father and he acts cold and intimidating because he doesn't know how to act. With help from Tomoka as Cure Mythicals, Moriki takes the first step in repairing his relationship with his son.

Cure Mythical (キュアミシカル Kyua Mishikaru) is the Pretty Cure alter ego of Tomoka. She controls the power of wisdom and transforms with the phrase, "Pretty Cure, Unlock My Story!". Her main attack is Wisdom Judgement, which she can only perform with her PreHeartBook.

In her first battle with an Endingu, Tomoka shows to be very skillful with thinking on feet and a hidden talent in fighting when she gained her Pretty Cure powers. Although she is a shy girl in nature, becoming a Pretty Cure allows her to show her confident and spontaneous side, showing no hesitation in using her abilities.

First, Tomoka's PreHeartBook appears. She opens it up and shouts, "Pretty Cure! Unlock My Story!" Then, the pages start to shine a pale blue. The pages fly out of the book like a flock of birds. The pages around Tomoka and changes her hair colour from indigo to lilac and creates her hair ornaments. The pages then cover her head-to-toe and flash bright blue, forming her Pretty Cure outfit. Tomoka snaps her fingers and sparks a glimmer of light that creates her star-shaped earrings. Cure Mythical jumps down and recites her introductory speech.

Tomoka: (智) means "wisdom", which might be a reference to her alter ego being the Story of Wisdom and (花) means "flower"

Fukumoto: (福) means "luck/fortune" and (本) means "origin", which might also be a reference to Tomoka's high-class and respected social standing

Tomoka's voice actress, Kana Hanazawa, has provided her voice in image songs about Tomoka. Many of them include the group with Kana Asumi, who voices Imari Suzukawa and Yoko Hikasa, who voices Nijiko Ōmitsu. 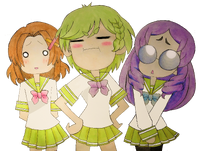 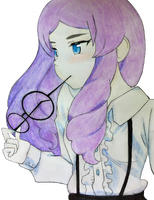 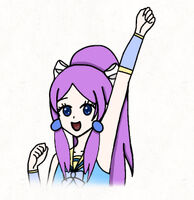 Tomoka (before the start of the series)
Add a photo to this gallery
Retrieved from "https://fandomofprettycure.fandom.com/wiki/Tomoka_Fukumoto?oldid=315684"
Community content is available under CC-BY-SA unless otherwise noted.