Thames (テムズ Temuzu) is an antagonist in Fairytale Pretty Cure!. He is one of the Dark Charm Knights who travels to Yūkibarano to capture Bukku before he can find the four Pretty Cure. In Episode 22, Thames take on the alias Ryoma Aisaki (愛咲龍馬 Aisaki Ryōma) to try and steal the Pretty Cure's PreHeartBooks. He becomes known as the "Academy's Heartthrob" at school and is very popular with the girl students much to his dismay.

In Episode 31, Thames becomes cursed and it begins damaging and draining his dark magic and life force.

He wears his Minwa Academy school uniform without the light pink first-year necktie and wears his white dress shirt unbuttoned.

In his human form, Thames' hair becomes dark purple and his eyes become dark green. He loses his elf ears and blue markings on his eyes. His casual outfit consists of a black leather jacket, dark orange dress shirt with a turquoise undershirt, black jeans, and dark sneakers. He is considered very handsome.

As of Episode 31, Thames's curse form has dramatically affected his appearance, damaging his right eye and arms, legs, and neck that he now has wrapped up to try and hide his wounds and keep his body from falling apart with the curse marking on his right wrist.

Thames is a spoiled brat with a playful personality. He finds joy in watching other people's misery and finds people's pain entertaining. He is also very short-tempered and can fly into a "temper tantrum", as Linda calls it when things don't go his way. Regardless, Thames is loyal to Kuroizado and believes that the only reason he exists is to fulfill his master's will and his desire to make Kuroizado reach his ambitions outways his own emotions.

As Ryoma, he continues to wear his bad attitude on his sleeve and is still narcissistic and easily annoyed when things don't go to plan. Though he's managed to restrain his temper and turned it into constant complaints. But, Ryoma shows to be more helpful-natured and finds himself opening up about his troubles as a Dark Charm Knight. Being created by dark magic, Ryoma believes that his only purpose is to serve Kuroizado and doesn't think of about himself in terms of likes and dislikes since he never thought he needed to since all he needs to do is fulfill Kuroizado's desires.

However, when the chance to destroy Tomoka's PreHeartBook resented itself, Ryoma couldn't bring himself to do it after the PreHeartBook shows him what happened to Xoanon and that, if Ryoma were to destroy the PreHeartBook, he would be purified and die just like Xoanon. Ryoma realizes that he selfishly doesn't want to die like Xoanon and may be a hint that Ryoma has come to value his own life and starting to face inner conflict.

Thames was the last Dark Charm Knight to be created by Kuroizado. He was twisted from the selfish side of dark magic and the sinful traits of pride and greed. Thames feels that he is nothing more than the dark magic he was twisted and blindly serves his master and help him take control of all of the worlds. in hopes of gaining a sense of fulfillment.

Thames starts to become distracted by his confusion towards humans. To test his loyalty, Kuroizado grants Thames a creature called a hex pixie. It will place a curse over Thames that would make him stronger than an army of Endingu by draining his dark magic, but it won't stop until there is nothing left. Conflicted with putting his life on the line to defeat the Pretty Cure, Ryoma faces his own problem: a girl confessing her feelings for having and asking him out on a date. Not understanding what a "date" is, Ryoma unintentionally rejects the girl. When Ryoma asks Imari after school, she explains that a "date" is romantic and chance for two people to become closer and get to known as each through fun activities like "going shopping and having food together". Still not understanding, Ryoma and Imari wined up going out to the market where Ryoma buys her a necklace with a bell on it and going to lunch at a cat café. Ryoma asks if this is a date since they went "shopping and are having food together". Imari laughs at how silly she was for not noticing this, but Ryoma misunderstands and storms off. Ryoma comes to understand that he's jealous of humans and wishes that he understood their emotions that he doesn't possess. Out of anger, Thames awakens the hex pixie and uses the curse to turn into a monster and destroy the center of town. Tomoka and Nijko manage to show up, but even their combined strength isn't enough. But before Thames can take their PreHeartBooks, Imari steps in and embraces Thames. Overcome by her compassion and kindness, Thames runs away. When he gets back to Desolate Castle and looks at his reflection, he can see that the curse has begun and is draining his magic and chipping away at his form.

Like the rest of the Dark Charm Knights, Thames can turn Fairytale Puppets into Endingu Voodoo to create Endingu. Thames only uses dark magic to fly and an endless supply of candy.

Imari Suzukawa - Thames loves having Imari as a "playmate" when they fight and even gave her the nickname "pinky". Upon meeting Imari face-to-face, he has troubles understanding her bighearted-nature and is very short-tempered with her carefree ways. Upon meeting her at school, Ryoma realizes that Imari is helping him learn about himself and states that he feels lighter around her and accepts her as his first real friend, though he is unsure if enemies can become friend, thinking that it is impossible, but wanting to learn more about what it means to be a friend when he is around Imari. In Episode 31, Ryoma has grown closer with Imari to put that he can't find in it himself to harm her and admits that she is one of the reason for his emotional conflicts.

Tomoka Fukumoto - Upon meeting Tomoka at school, Ryoma was surprised to learn that the Pretty Cure of Wisdom turns out to be an insecure, helpless romantic and is easily able to see through her and identify her secret crush on Masato. He treats her nicely, though only to gain her trust and joins the Student Council to get closer to her.

Nijiko Ōmitsu - Upon meeting Nijiko at school, Ryoma was taken aback by her blunt, outgoing-nature as well as annoyed with her rude personality. He seems to buttheads with her the most, but they are both easily about to relax around one another. Nijiko also gave Ryoma the nickname "Eggplant Head" most likely out of likeness.

Linda - Thames follows Linda's orders, but not without complaining. However, after Linda masterminded Xoanon's demise, Thames holds a grudge against and has lost her trust. Nevertheless, for the sake of fulfilling Kuroizado's will, Thames continues to work with Linda, but not without constantly looking over his shoulder.

Xoanon - Thames finds Xoanon annoying and pathetic when he is defeated and acts very arrogant around him. He loves to taunt him and make Xoanon mad. His relationship with him is that of a bratty little brother. However, when Xoanon dies, Thames surprise himself when he cries for his late-teammate, showing to have cared for Xoanon more than he thought.

Thames: (テムズ) is an ancient Celtic name that means "the dark one" 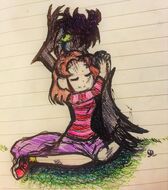 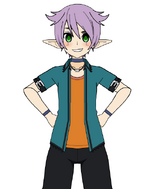 Ryoma's school uniform
Add a photo to this gallery
Retrieved from "https://fandomofprettycure.fandom.com/wiki/Thames?oldid=278605"
Community content is available under CC-BY-SA unless otherwise noted.