A widely popular carnival has been set up in Hinanshokibo for the week. Known to carry a group of talented circus performers named Pierrot's Circus as the main attraction, the carnival has become a huge success. However, the circus has stirred mysterious incidents of people forgetting the events that happened there once they leave. The girls from the current generation of Pretty Cure warriors hear news of the carnival and decide to visit during school break. Little does everyone know the sinister intentions hidden behind the scenes of laughter and fun.

The groups in Pretty Cure Sparkle Star: Carnival Chaos are based on the color coordination of each Cure which is very much like Pretty Cure All Stars DX 3: Mirai ni Todoke! Sekai wo Tsunagu☆Niji-Iro no Hana. One group, however, being the black and white group includes a non-cure (Kurone Ichiro). Each group is sent to a different alternate dimension and verse one of the six main antagonists. 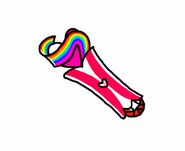 Miracle Carnival Light
Add a photo to this gallery

Retrieved from "https://fandomofprettycure.fandom.com/wiki/Pretty_Cure_Sparkle_Stars:_Carnival_Chaos?oldid=273511"
Community content is available under CC-BY-SA unless otherwise noted.