Yumeko , Keiko , Rena , Ringo and Mizuki , went to the festival in Hikari town. Here they met Mana, Rikka, Alice, Makoto, Aguri and later other cures too. But their fun is interrupted by Time Girl, who want to stop the time forever. 38 Pretty Cures will fight to protect the time!

Pretty Cure were separated in five groups, but except leader group they aren't the same as they were in All Stars DX 3.

First group had to fight against Shadows and monsters from series and had to defeat them all to get out.

Cures from second group were send to quiz room and had to answer all questions right to get out.

Third group was send to world where they had to fight their dark selves Shadow Cures.

Fourth Group was send to sports world, they have to win sports games to get out.

Fifth Group was send to labyrinth, they had to find exit to get out.

Let's teach Mana how to sing! - In this special, Urara find out that Mana is awful at singing. That's why she decided that she will teach her to sing together with Makoto.

Rouge & Sunny & Flame - Rin, Akane and Keiko find out that they are a bit similar in their hobbies. They were just talking about sports they are playing when monster that is mix of Hoshina, Akanbe and Shadow attack them. Now three have to join their powers to defeat it.

Mascots vs monster - All mascots are having tea party when they suddenly hear strange noise. They though they are attacked by monster and do plan to defeat it. When they though that it went away they checked what's going on and found out that noise was actually doing of Ai and Chiffon who were moving things when they were sleeping.

Shiny Rose - Shiny Luminous and Milky Rose both fight with Pretty Cure as warrior with Cure like powers. Now two of them have to defeat Hoshikenna mix of Zakenna and Hoshina.

Youngest Girls - Youngest cures, Ako, Aguri and Ringo were talking to each other and became good friends and also notice that Ringo is only one of them who appear at beginning of their seasons. 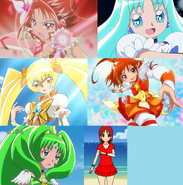 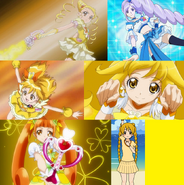 All cures in civillian form.
Add a photo to this gallery

Retrieved from "https://fandomofprettycure.fandom.com/wiki/Pretty_Cure_All_Stars_New_Stage_3:_Kibou_no_Tomodachi!?oldid=255632"
Community content is available under CC-BY-SA unless otherwise noted.