Fandom of Pretty Cure Wiki
Register
Don't have an account?
Sign In
Advertisement
in: CCPCG-Stubs, Cures, Characters,
and 5 more

Paige Fujiko (藤子ページ) is the lead Cure of the Candy Crystal Precure Go! Team. She is the first of the Cures to get a Lollipop Harp. And Her catch phrase is "Flip the Page. What's next? (ページを反転させる。次は何ですか？)"

Paige's mother is American and Paige's father is Japanese. So, she spent many years in Japan. But her father's job made them move back to America. A few years later, they moved back to Japan and back to her old school.

She is a optimistic tween that believes she is not ready to grow up to be a teen. She enjoys drawing, acting, and romantic movies. She also loves horses and ponies. Her favourite candy is lollipops

She has long dark pink hair tied in a braid and she has curly bangs. She is wearing a pink top with blue buttons and a ribbon. She has very puffy blue shorts and pink shoes. Finally, she has a white long sleeve undershirt and white socks.

She has long pink hair tied into a ponytail and she has curly bangs. She is wearing a puffy dress with puffy sleeves and a bow. She also has gumballs on her skirt and a belt with gems and gloves. lastly, she has white socks and white and pink high heel shoes.

Paige became a Pretty Cure on Jan 27, 2017 while on her way home from school. And Sweets was the one who told her how to transform.

Lolly is a shortened version of the word Lollipop which is hardened sugar syrup on a stick that is usually given to children to enjoy. Lolly is also the casual British-English word for lollipop. 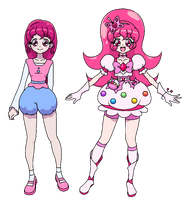