—Erina, to Aine in "Stifling Persuasion"

Ninomiya Erina (pronounced as Neno-meya Air-rena) is one of the main protagonist of Prism Pretty Cure!. She attends Hoshizora Academy in the middle school division as the president of the Astronomy Club. Erina's main catchphrases are "I refuse to believe that..." and "How frustrating." She transforms into Cure Cerise, the Guardian of Ruby and uses a bow as her main weapon.

Erina appears as a young girl, primarily dressed in red, green and some yellow. She has thin, short poppy-red hair with her bangs swooped to the right. She is almost always seen wearing her trademark red hat. Her eyes are a dark blue colour. She wears a red thigh-length dress with black ruffles underneath the skirt and a bow above the chest. Overtop of the dress is a dark-green jacket. Completing the look with knee-length brown boots.

Her school uniform includes a purple sweater overtop a white sailor school uniform with purple cuffs and yellow lining and a teal bow attached to the front. She wears short white socks and sneakers.

As Cure Cerise, Erina's hair remains the same reaching above her shoulders and is seen to have a paler tint. She wears her Legendary Crystal as a hair accessory. Her eyes remain the same colour. She wears a ruffled white long-sleeve shirt underneath a red corset and a red short skirt with varying-sized brown ruffles covering it. She also wears a matching cape with white ribbon attached to the hood and red ribbon that ties the piece together. Completing the look with white stockings and red shoes with string.

At the start of the show, Erina is easily described as eccentric and overly passionate of her scientific ideals. She is quick to chase after answers in order to fill her taste of knowledge and won't hesitate to involve others around for her own selfishness. This is seen when she persistently goes after Aine and the rest to join the Astronomy Club because of its lack of members. She has also shown to be irrational to anything non-scientific or unable to be explained, following her dismissiveness to miracles and fairytales.

Although Erina has no trouble interacting with friends, she does have trouble actually making them. This could have been a result of her having been totally deniable to people's thoughts that differ then her, as well as interacting more with her previous seniors in the Astronomy Club. Regardless, both her and Aine find themselves to be similar because of their introverted natures.

Erina is an intellectual individual that aspires to become an astronomer when she grows up. Thus working towards her dream of studying stars and the universe, which she likes to view as an even greater mystery. She has always been curious and learns better with written information and documentations. This trait contrasts with her adaptability, for she is quite capable of forming attack plans with the group in order to take down stronger foes.

Erina is extremely fond of books, as she always brings a large collection of books with her to the club room and reads them frequently. She tends to show no interest in the discussions at hand, especially when she is engrossed in her books, but will interrupt anything that catches her eyes. Additionally, Erina is a sucker to cheesy-love stories such as romance manga and can be caught up in her delusion at times. She enjoys teasing others accordingly on possible relationships and is always shipping her friends with each other. However, Erina is completely oblivious to her own love life as well. 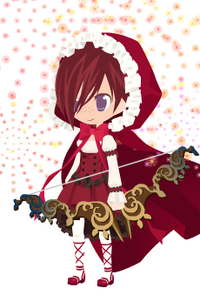 Cure Cerise, the Guardian of Garnet is the Pretty Cure version of Ninomiya Erina. She is the so called "brains" of the group, relying on theory and strategist tactics to help overthrow her opponents. While Erina does prefer playing defensive, she is shown to be fully capable in combat. Her main weapon of choice is a golden bow that utilizes her powers into weaponized attacks as arrows which resemble fireworks.

Ninomiya Erina's voice actress, Amamiya Sora, has participated in many songs for the character she voices.

Retrieved from "https://fandomofprettycure.fandom.com/wiki/Ninomiya_Erina?oldid=215679"
Community content is available under CC-BY-SA unless otherwise noted.