"I know that no matter how you guys improve me much. Thank you."
―Misaki Nanami, final episode
❝How do you know that was a myth, Shizu?❞

Nanami has shoulder length orange hair that is worn into a ponytail. She wears a blue dress, and also bloomers. She has black eyes.

As Cure Bliss, her hair turns lighter and longer, and her eyes have changed to turquoise.

Nanami is the most mature of the group. Despite being the shortest, her form is analyzed to turn her into the oldest member of the three. She seems to be intelligent, and never shows to be strict to Mai and Tomoyo, unlikely, she is strict with Shizu, who bullied her elsewhere.

❝The shining light and flow all around in nature, Cure Bliss!❞

Super Cure Bliss is Nanami's Super Cure form. She used it in episode 45 until 50.

Misaki - while Mi (三) means three, and Saki (崎) means small peninsula. All together it means "three small peninsulas". It was referenced in episode 10 when her mother lets Nanami see her old family photos, and Rintarou, Manaka, and her were referred as the 3 youngest kids.

Cure Bliss is a noun which is actually meant: "perfect happiness; great joy", and also other terms like "a state of spiritual blessedness, typically that reached after death". 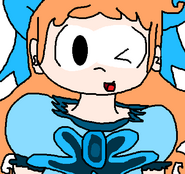 Every reference of Cure Nanami.

KiraKira version of Cure Bliss, transforming.
Add a photo to this gallery
Retrieved from "https://fandomofprettycure.fandom.com/wiki/Misaki_Nanami?oldid=294597"
Community content is available under CC-BY-SA unless otherwise noted.