Masato Kashima (鹿島雅人 Kashima Masato) is a minor character who appears in Fairytale Pretty Cure!. He a third-year student at Minwa Academy, the richest boy in school, and President of the Student Council and Captain of the Kendo Team. He is childhood friends with Tomoka Fukumoto, but is completely oblivious to her crush on him. In Episode 24, it is revealed that Masato is secretly Tomoka's butler in order to keep up appearance after his family went bankrupt nearly five-years-ago.

Masato is an average height, light-skinned boy with chin-length black hair that curls outwards. He has a short cow-lick and his bangs parted down the middle. He has grey eyes behind thick-framed dark brown glasses.

He is only ever seen in the Minwa Academy male uniform which consists of a white shirt, green blazer, grey pants, black shoes, and the third-year purple necktie.

Before the start of the series, Masato's hair was thicker, longer, and less well-kept.

Masato is a serious, respectful, and formal 15-year-old boy. Because of his wealthy upbringings, Masato was taught to be dignified, well-groomed, and have a strong sense of responsibility. He is, however, very short-tempered, fussy, and can be quiet harsh at times. But, it's only to help other push themselves and dig deeper into their passions. This also makes Masato honest and strongly believe that everything must have a purpose.

Before meeting Imari, Masato didn't have the same sense of seriousness or responsibility for the future. Although he still had a blunt and pessimistic streak, he didn't have a target for those feelings. In Episode 33, it is further revealed that Masato had a careless attitude because he didn't want stress of responsibilities.

How Masato Became a Butler

Without realizing it, Masato met Imari a year before the start of the series. He was a second-year student at Minwa Academy. At this time, Masato couldn't care less about anything and hated things like responsibility, not wanted the stress or complication. With the school year coming to an end, the Student Council President, Hayate Nagatsuka, desires Masato to take his place next year and become the new Student Council President. At first, Masato declines, not wanting to have to deal with that kind of responsibility. Pondering this, Masato walks home from school and stumbles upon a girl up in a tree. She falls and lands right on him. Frustered by the girl's strange behavior, Masato asks why she was up in a tree to begin with. The girl said she was trying to help a baby bird who fell out of its nest. Masato shrugs it off, thinking it's stupid that she put herself in danger just to save a bird. The girl gets made at him and tells him he is their future and need to care and care about every life, big and small. Although he never got her name or face due to her overgrown bangs, that girl changed Masato and his life forever.

Tomoka Fukumoto - Masato's childhood friend and, at the start of the seris, only show her his soft-side. Masato is also very protective of Tomoka and her status to the point of being overprotective and always babying her. In Episode 27, Masato learns that Tomoka is Cure Mythical and, although shocked and a bit angry that she kept this secret from him, states that he just wants her to be safe and is implied that he won't tell anyone her secret. Masato seems completely oblivious to Tomoka's crush on him.

Imari Suzukawa - Masato is well aware of Imari's standing at school as the poorest girl in school along with being dubbed the "Club Flunk". Masato is easily short-tempered with Imari and she is the only person that can make him lose his cool. Ironically, however, he seems to have developed a little crush on her alter ego, Cure Fable. Imari is completely oblivious to this. In Episode 25, Masato reveals that he actually harbours jealousy towards Imari since she never believed she had to lie about who she was when she enrolled at Minwa Academy until Masato hiding the fact he's a butler. Masato accepts Imari into the Kendo Team, the start of a friendship starting to form. In Episode 32, it is revealed that Masato and Imari had met before the start of the series, but Masato never caught her name and her bangs were covering her face. She did, however, leave a deep impression on him, making him the more serious and hardworking person he is now. In Episode 33, it is hinted at that Masato might be in love with Imari. 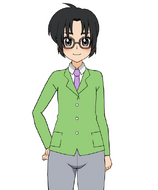 Masato (before the start of the series)
Add a photo to this gallery
Retrieved from "https://fandomofprettycure.fandom.com/wiki/Masato_Kashima?oldid=315507"
Community content is available under CC-BY-SA unless otherwise noted.