"Victory will always be mine, just sit back and watch!"
―Zavok, Mario and Sonic at the Rio 2016 Olympic Games

Kodama Maverick (木霊 マヴァーイック) is the director, writer, and creator of Norse Precure! and Zeti Precure.

She has short brown hair that can shine in the sunlight. She has been wearing glasses since she was three years old. On the topic of three years old, she was then diagnosed with minor autism. But she's also known for having a tragic past ever since she joined the wiki.

Due to her tragic past, she has been having life issues and will get punishments from her real mom at times. Most of the time, the punishments revolve around her hobbies because she can't be honest and trustworthy and doesn't know what trust is. But also for her grades in school. These punishments will last until her grades go up, even if its like winter break. She will then cry about it and then become angry. This is because she doesn't have older siblings at her moms but does at her dads.

She has even faced issues in school. When she started junior high school, she was bullied by other girls in school and eventually boys. A year later, she decided to join the wiki in hopes that she can make some friends. She's also a smart student but lacks grades in high school.

This just looks so pretty 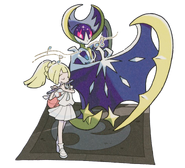 My First SSR I pulled in YuYuYui
Add a photo to this gallery
Retrieved from "https://fandomofprettycure.fandom.com/wiki/Kodama_Maverick?oldid=234079"
Community content is available under CC-BY-SA unless otherwise noted.