Hoshino Evelyn (pronounced as Ho-she-no Eve-len), born as Princess Evelyn Aurora de Hoshino is one of the main protagonist of Prism Pretty Cure!. She is the princess of the Aurorean Dynasty but was overthrown during the rebellion by Grimm. She transformed into Cure Celestia, the Guardian of Amethyst and used a sword as her main weapon.

Evelyn made her official appearance in the "Prologue" before being re-introduced in "The Wish Upon A Star."

Evelyn appears as a young girl, primarily dressed in purple, yellow and some white. She has straight, long light-blonde hair that reaches to her mid back, the ends being short towards the middle and longer outwards. Her eyes are a violet colour with a light purple tint.

As Cure Celestia, Evelyn's hair remains the same. The crown she wears is replaced with a purple knight hat adorned with a large yellow star and feathers as well as her Legendary Crystal worn as a hair accessory. Her eyes remain the same colour.

A curious and sincere girl who took on the lone responsibility of governing her nation at a very young age. Evelyn is an inspirational ruler with the pure intentions of making peace once again with the Shadow Domain and her childhood friend Grimm. However, she was quickly defeated during a surprise attack on the capital, and now sleeps soundly within a massive crystallized rock. Though physically unresponsive, she is able to communicate with Aine in the realm of dreams. 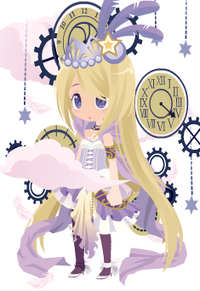 Cure Celestia, the Guardian of Amethyst was the Pretty Cure version of Hoshino Evelyn. She lost her powers as a Pretty Cure during the rebellion and is currently inactive. Her main weapon of choice was a golden sword that was able to multiply in numbers and follow her movements.

Cure Celestia profile
Add a photo to this gallery

Retrieved from "https://fandomofprettycure.fandom.com/wiki/Hoshino_Evelyn?oldid=224746"
Community content is available under CC-BY-SA unless otherwise noted.