This also applies to pictures, do not steal or take rights from these pictures. Thank you for understanding!

It's wonder, It's magic! Believe! Believe!

When Shinjiru was little, her life was filled with wonder and joy. She had a lovely life, a happy family, and a very strong bond with her dad. They did everything together, laughing and enjoying every moment they both spent with each other. Life seemed to be perfect for the young girl, until one day. Her dad had gone to work and he never came back.

He never came back for days, weeks, and soon, years. As time went on, Shinjiru grew up without the bond she once had with her now missing father. Her childhood, memories, everything. It all seemed to crumble and fade away, until one fateful day at the park.

"With the power of sweetness, kindness, happiness, magic, and love! We fly over the rainbow and shine around the world! Because we are Hopefully Pretty Cure!"

Shinjiru is a clumsy girl who is always late and is really bad academically at school. When she is serious, she is super duper serious. She loves food, she thinks food is life. Before she became a pretty cure she didn't believe anyone. Because when she was little, her father was missing and they promised her to find him. But they didn't find him. (She was 6 years old, so never break a promise). Shinjiru's catchphrase is "Super Duper~" and "It’s wonder! It’s magic! Believe, Believe". Her alter ego is Cure Believe (Sweet Believe in Rainbow Healers) and her powers are the believing crystals. In the first few episodes, she is really bad at fighting but after a while, she can fight better.

She is smart and is the council president. She loves to study and is sometimes scared of things. The first time when she met Shinjiru was the worst time of her life. She didn't like Shinjiru because she was a little bit annoying. But after a while, they understand each other more and became best friends. Before she changed into a pretty, she doesn't believe in her own hope. But Shinjiru helped her. Her alter ego is Cure Hope (Aqua Hope in Rainbow Healers). Her powers are the hoping aqua.

"The big happy smile of a surprise, I'm Cure Suprise"

Kiyoshi is a happy girl that loves to be happy and to make other people happy. She likes to eat candy and she laughs so much. Before she became a Pretty Cure, she didn't know what real happiness was, she only cares about her own happiness. But when she is with Shinjiru and Maiha She feels real happiness. Her alter ego is Cure Suprise (Happy Surprise in Rainbow Healers). Her powers are the happy light. Her fight technique is more like jumping in the air and doing silly things!

Dowa is a brave girl. She loves fighting like karate, judo, and etc. But she have also an emotional side. She moved when she was little but she didn't want that. She saw a falling star and made a wish but it never came true, when she was in her new town (the same town where Shinjiru and the others live) She was bullied because she was different. A few years later as a 14-year-old girl, she became a Pretty Cure! Her alter ego is Cure Wishes (Magical Wishes in Rainbow Healers). Her powers are the burning stars. She is the best fighter of the group but she isn't a professional.

"The first kiss is a sign of true love, I’m Cure Kiss"

Minako is a famous singer in Japan and America. She loves to study just like Maiha (that's the reason why they are good together) and is a little bit a drama queen. Minako had a lot of boyfriends but she never find the true lover. After her last Boyfriend, she didn't believe anymore in love. She taught that real love fake was and doesn't exist. But Shinjiru helped her that love is everywhere, not only in boyfriends or girlfriends but also in family and friends, it took a long time before she believed Shinjiru but after a while, she finds her love, she didn't find her true love but she will work for it. Her alter ego is Cure Kiss (Valentine Kiss in Rainbow Healers). Her powers are true love. Her fighting style is like dancing, ballet and gymnastics.

Glauben is the number 1 fairy of Shinjiru, he is bossy sometimes, and mean sometimes to Shinjiru. He loves Maiha (as a friend), he says that Kiyoshi looks like Shinjiru twin, he also loves Dowa and Minako. In human form is Glauben a nice, calm guy. He is totally different. He is a little bit in love with Shinjiru.

Voiced by Sailormoondrops and loopy

The Curefully fairies are the fairies of the characters. (Shinjiru second fairy) They are the protectors of the curefully phone, and they are the pretty cures true power. We don't know where they are come from! Glauben said that they came from the Pretty Cure’s true feeling.

Michio is the brother of Shinjiru. He is 10 years old. He loves games, eating and is sometimes selfish. He doesn't like it when Shinjiru calls him "Mimi-chan". In the first few episodes taught, he that Shinjiru was very annoying but after he knows that she is a pretty cure, he has more respect and cares for her.

He is the missing father of Shinjiru.

The only thing we know about him is that he really, really loved his family and that he got missing on his way to work.

Kirai is the first enemy that we meet! He is the evil prince of the depressed underworld! He hates everything! Before he was evil he had an other life but we don't know about his other life!

Warui is the brother of Kirai! He is the second prince of the depressed underworld! He lied always and is really selfish. Shinjiru have a little crush on him! Also before he was evil he had an other life.

Is the dark King of the underworld! He is made of pure Darkness and tiers. He loves sadness and anger, it gives him power! He really wants the L'arc en ciel book because it has a lot of power! And if he has the book, he can destroy the whole universe.

Monsutah's are monsters created by Kirai and Warui. Kirai and warui can turn an everyday object into a Monstutah with the power of hate, lies and selfish.

Every Pretty Cure seasons have attacks and group attack! These are the Hopefully Precure’s attacks.

This is Cure Believe’s first attack!

This is Cure Hope’s first attack!

This is Cure Suprise’s first attack!

This is Cure Wishes’ first attack!

This is Cure Kiss’ first attack!

This is Cure Believe’s second attack!

This is Cure Hope’s second attack!

This is Cure Suprise’s second attack!

This is Cure Wishes’ second attack!

This is Cure Kiss’ second attack!

This is the first group attack of the Cures! They use the Legendary Book to attack the enemy!

Is a phone that they use to transform into a Pretty Cure warrior. Every Cure Fully phone have a protector called: "Cure fully fairies". Before they transform a Cure fully fairy say the true power of a cure, then the cure says her transform phrase (Curefully makeover) and then her speech.

Is a magical book with a lot of power! The l'arc en ciel book can create miracles and grant wishes. The cures use it for their special attacks. The enemies want to have it because they can destroy the world with it.

Is a wonderful brouche that gives the cure an updated form and power.

is the city the season takes place in.

is the school the girls attend.

is the park and secret place of Shinjiru and the girls.

is the world of Sombre and his warriors.

Let's Go! Let's Fight! Because We Are Hopefully Precure!

This Day is Wonderfull! (End 2)

Official poster of the 5 Pretty Cures 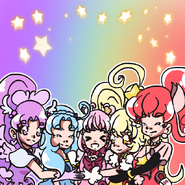 Official Art of the 5 Pretty Cures 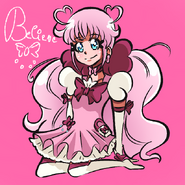 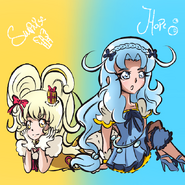 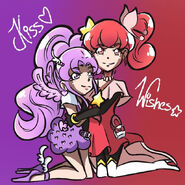