When Pretty Cure was in their store, a small-sized short girl entered. Michi who found her so cute directly embraced her by caressing her. This small doll is called Sugar. Suddenly a band of monsters entered the store trying to catch Sugar. Michi, who was very upset, took Sugar in the arms and hug her to protect her and then she transformed into Pretty Cure. When Cures went out of the store during their attack, they were in the Flower Sweet Kingdom. It is the kingdom where lived Sugar.

Suddenly, Sugar jumped from the arms of Cream and she said: " Dark Sugar Power! Exchange! ". Sugar grew up: Her eyes and her hair become black (the color of despair and hate). (Sugar is a member of Sadness Zone.). Sugar was unlike the other inhabitants of her kingdom a dwarf.Everybody found her strange and bully her. She felt alone and desperate. Then Yoru and Kuro moved forward to her and they offered her the chance to grow up if she becomes Kanashimi. To get it over with Pretty Cures, Sugar decided to use "Dark Sugar Final Shoot". This is the great powerful power which can even destroy Sugar. Before being affected by this power, Pretty Cures noticed that Sugar cried.

Cure Caramel was able to protect Pretty Cure thanks to her power, while the others help Sugar. Cream told her that she adored her small shape and that she found her too cute by embracing her. Sugar who received the feelings of Cream became again the same. She admits to Pretty Cures that she regrets her error but t is too late to correct it. Chocolat, who knows the feelings of Sugar tells her that if she trust her friends, she will manage to correct her error. Then Cherry tells her that thanks to her friends, she will manage to resist the mockeries of others. As for Caramel, she explains her that the appearance has no importance as long as our heart is filled with love.

And when Pretty Cures believed that they had gained, Dark Shade appeared and sent an immense power towards Pretty Cures and absorbed their power. As soon as she saw the Pretty Cures on the ground, Sugar shouted by crying " I shall not let with you hurt Pretty Cures ". Then a light appeared in her hand: it was Tasty Sugar Pad. Then Sugar was transformed into Cure Sugar: " the sweet feelings by a heart filled with love. Cure Sugar! "(愛に満ちた心の甘い感情キュアシュガーAi ni michita kokoro no amai kanjō, Kyua shugā!). Sugar sends Miracle Sugar Lights to give some power to Pretty Cures. Later with "Royal Cake Power " and " Sweet Love Final Shoot ", Dark Shade was overcome and Sweet Flower Kingdom was reconstructed. 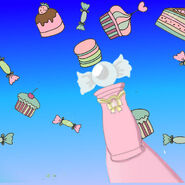 Add a photo to this gallery
Retrieved from "https://fandomofprettycure.fandom.com/wiki/Happy_Precure!_Kimochi_Sweet_Flower_Kingdom!_Cure_Sugar!?oldid=183800"
Community content is available under CC-BY-SA unless otherwise noted.