"Monster corrupted by darkness, we will return your happy ending to you!"

Fairytale Pretty Cure! (フェアリーテイルプリキュア！ Fearīteiru Purikyua!) is a fan-series created by SAYkokoro, inspired by the Japanese magical girl anime series. It was first published on March 17th, 2016 and can be found here. The series' main motifs are fairytales, magic, and friendship!

It is planned to be 51 episodes.

*Disclaimer: Credit for all the fanart is credited to the awesome cosmicDemons (Yotsuba) , hashida56/curedaybreak, CureKaguya, Cure Sweetie, Cure colouful, MonoTheMonochrome

A hundred-years-ago, the world of "Fanciful Kingdom" was created by the First King, First Royal Wizard, alongside the Pretty Cure. Cure Fantasia, Cure Sage, Cure Mystic, and Cure Cherish with their combined light magic. Through it, they created beautiful dreams and hope. Until one day, a mysterious being only known as Dead End discovered an evil power within light magic. He created a new form of magic called dark magic, but instead of creation, it only sets out to destroy. With this newfound power, Dead End desired to overthrow Fanciful Kingdom and spread despair and sorrow to every other known world as its fearful overlord. Luckily, Dead End was defeated by the Pretty Cure before his wicked ambitions became reality with the power of four wondrous musical instruments known as the "Fairytale Instruments" and imprisoned Dead End at the edge of Fanciful Kingdom only touched by shadows.

In the present, in the city of Yūkibarano, an ordinary school girl, Imari Suzukawa, begins a new chapter of her life as she starts her first-year of junior high in a not-so-ordinary school, filled with the richest prodigies in all of Yūkibarano. Before Imari can find her footing alongside her new classmates, something falls out of the sky and crashes right into Imari. That something was Bukku, a fairy. But not just any fairy, the Prince of Fanciful Kingdom who managed to escape his world that has been attacked by a dark wizard known as Kuroizado and his underlings, the Dark Charm Knights, that followed him to Imari's world. With the magic words "Pretty Cure, Unlock My Story!", Imari is chosen as one of the four Pretty Cure who are destined to find her missing teammates, rediscover the lost Fairytale Instruments, save Bukku's kingdom, and defeat Kuroizado and his monstrous creations, the Ending.

Pretty Cure of the Past

SAYkokoro's art of the Four Guardians of Magic (from left to right): Orenda, Tsubusu, Gazo, and Sen 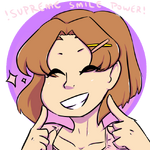