Claire Baldwin is a freshman at Edison High School. Her relatively normal life changes when she encounters a talking lightbulb named Amp.

The series includes a multitude of Cures, all themed after elements of the periodic table.

The main Cures of the series are themed after the reactive nonmetals and noble gases. They represent the very foundation of the universe. Their mascot is Amp.

The leader of the group, Claire is a stubborn and confident high school freshman. Her alter ego is Cure Neon (キュアネオン Kyuaneon). Her main attack is Neon Beam.

Claire's best friend since elementary school. Although she always means well, she can be rather blunt and straightforward, which often leads to tension between her and her peers. Her alter ego is Cure Hydrogen (キュア水素 Kyua suiso). She has the ability to control and manipulate water regardless of physical form (meaning she can control mist and ice as well as liquid water.) Her main attack is Hydrogen Blast.

Olivia is a timid girl who wants to be a nurse. She's very kindhearted, but has low self-confidence. Her alter ego is Cure Oxygen (キュア酸素 Kyua sanso). As Cure Oxygen, she has the ability to control and manipulate flames. Her main attack is Oxygen Burst.

Veronica is the lead editor of the school newspaper. She takes her job very seriously and has an unwavering passion for writing and journalism. She usually comes across and cold and strict, especially when she's doing her newspaper work, and often lets her desire for perfection get ahead of her. However, she is a very sympathetic person, even though it rarely shows. Her alter ego is Cure Carbon (キュアカーボン Kyuakābon). Her main attack is Carbon Quake.

A 12th grader and the eldest of the Cures. Despite this, she tends to be very childish. Her alter ego is Cure Helium (キュアヘリウム Kyuaheriumu).

Pigment Pretty Cure (ピグメントプリキュア Pigumentopurikyua) Three of Quantum Kingdom's other Cures. They represent the beauty of the universe. Its members include Susan Monet, Cheryl Vermeer, and Louisa Degas, who are students at the Renaissance Academy of Art. Susan is Cure Chrome (キュアクローム Kyuakurōmu), Cheryl is Cure Titanium (キュアチタン Kyuachitan), and Louisa is Cure Cadmium (キュアカドミウム Kyuakadomiumu). Their mascot is Colbalt.

The mascots of Elemental! Pretty Cure are themed around science-related objects. They have the ability to make their faces invisible or visible at will as means of disguising themselves.

Amp is a fairy from the Quantum Kingdom, sent to Earth to find the Elemental Pretty Cure. He resembles a light bulb. He ends his sentences with "~anpu.

Ferro is a fairy from the Quantum Kingdom, sent to assist Amp and to find other Cures. She resembles a horseshoe magnet. She ends her sentences with "~fe."

Cobalt is a fairy from the Quantum Kingdom and the mascot of Pigment Pretty Cure. She resembles a blue gemstone.

Quasar is the main antagonist of the series.

Experiments are the main monsters of the series. They are manifestations of one's negative thoughts or intents.

The item used by the main Cures to transform. When a Cure Molecule is inserted, it allows the girls to transform or use a special attack. 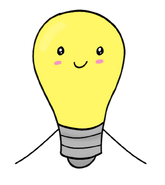 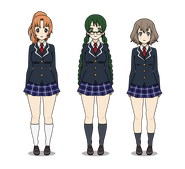 The students of the Renaissance Academy of Art: Louisa Degas, Susan Monet, and Cheryl Vermeer.

Susan as Cure Chrome, Cheryl as Cure Titanium and Louisa as Cure Cadmium.
Add a photo to this gallery
Retrieved from "https://fandomofprettycure.fandom.com/wiki/Elemental!_Pretty_Cure?oldid=328996"
Community content is available under CC-BY-SA unless otherwise noted.