It is the sequel to Earth Defense Pretty Cure!. The two seasons share the main themes, which are love and friendship.

With things a bit calmer since the whole Loveless World fiasco, the girls can get back to what’s important in life -- like hanging around at karaoke and being lazy. But when the Love Bracelets start calling, they’ll have to jump back into the action.

Wombat (ウォンバット, U~onbatto?) / Ai (愛, Ai?) - Ai is a pink-furred wombat-like creature reasonably referred to as Wombat because of his appearance. When the Pretty Cure's world is in trouble once again, he returns with new items to help defeat the new evil. He is a scholar and famous inventor from another dimension. He is usually calm, kind and understanding, especially to Akiko but has a short temper. He can transform into a human, and later becomes a doctor at Akiko's school to keep watch over her and the rest of the Pretty Cure, but is still prone to possessing Takayama-sensei.

PEPPer (PEPPer, PEPPer?) consists of the twin exchange students that form the team and idol unit. The members are:

Kosho Akiyuki (コショウ新房, Akiyuki Koshō?) / Galaxy Luna (ギャラクシールナ, Gyarakushī Runa?) - A seventeen year old girl and exchange student at Kawai High School. Akiyuki is the older twin sister of Kosho Haruyuki. She, in contrast with her younger sister, has a kinder manner of speaking though is blunt to a fault. She likes to take things slow and maturely and achieve perfection. She transforms into her alter ego Galaxy Luna and uses the power of the Moon.

Kosho Haruyuki (コショウ晴之, Haruyuki Koshō?) / Galaxy Sol (ギャラクシーソル, Gyarakushī Soru?) - A sixteen year old girl and exchange student at Kawai High School. Haruyuki is the younger twin sister of Kosho Akiyuki. She, in contrast with her older sister, has a harsher manner of speaking. She is a short tempered and views herself as superior then others. She transforms into her alter ego Galaxy Sol and uses the power of the Sun.

Shio (塩, Shio?) - Shio is the evil mascot, and motherly figure to the Kosho twins. She is very perceptive and a good cook, worrying over the two very easily. Many of her motives are unknown but Shio is shown to be genuinely caring. In episode 19, it was revealed that Shio is the younger sister of Thunder.

Staruru (STARURU, STARURU?) - The main monsters in the series summoned by the villains to battle the Pretty Cure. Unlike some other monsters, they are not made of objects, however are humans transformed into a evil ego of themselves because of their negative feelings.

Satomi Kyoko (里見京子, Satomi Kyōko?) - Kyoko is the Student Council vice-president at Kawai High School. After the Loveless World incident, Kyoko continues on being friends with Akiko and is happy with Chieko's progress with Suzu. Currently, she along with the other members of the Student Council are attending a boarding school in America.

Takayama-sensei (高山先生, Takayama sensei?) - A young teacher still constantly being possessed by the creature Wombat, and is the Defense Club's adviser. She remains cheerful but also fairly timid and flustered prone. She becomes friends with Ai when he becomes the school's doctor.

Kinoshita Kouki (木下毅, Kinoshita Tsuyoshi?) - Kouki is a member of the Kawai High Press Club, and is usually shown interviewing the Kosho twins. Ever since the Loveless World incident, she has stopped bothering the Defense Club and is on the down low.

Matsuno Takara (松野宝, Matsuno Takara?) - Takara is a member and photographer for the Kawai High Press Club. She is usually seen expressionless but when taking pictures she becomes very passionate. She is usually seen with Kouki whenever she interviews someone. Ever since the Loveless World incident, she has stopped bothering the Defense Club and is on the down low, more interested in taking pictures.

Thunder - A previous villain that's out for revenge for the Pretty Cure, and Shio's older sister.

Note: IMAGES ARE NOT MINE 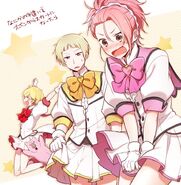 Retrieved from "https://fandomofprettycure.fandom.com/wiki/Earth_Defense_Pretty_Cure!_LOVE!?oldid=284380"
Community content is available under CC-BY-SA unless otherwise noted.