It is the predecessor to Earth Defense Pretty Cure! LOVE!. The two seasons share the main themes, which are love and friendship.

The Defense Club at Kawai High School; Himura Akiko, Mizushima Umi, Kazesawa Suzu, Amachi Rio and Sakurai Maki who all regularly attend a local karaoke place run by Akiko's sister meet a strange pink wombat-like fairy who comes from another dimension giving them the task of being the protecters of LOVE. With the transformation items "Love Bracelets", the group transforms into Earth Defense Pretty Cure! who use the power of love to fight monsters.

Wombat (ウォンバット, U~onbatto?) / Ai (愛, Ai?) - Ai is a pink-furred wombat-like creature reasonably referred to as Wombat because of his appearance, who meets Akiko after a malfunctioning in his teleportation device. He is a scholar and famous inventor from another dimension, creating the devices for the Pretty Cure, to help their world from being conquered. He is usually calm, kind and understanding, especially to Akiko but has a short temper. He can transform into a human, and is prone to possessing Takayama-sensei to keep watch over Akiko and the rest of the Pretty Cure.

Adamas Trio (アダマス・トリオ, Adamasu Torio?) is a group consisting of the three student council members. It was created by the fairy Thunder from the Conquest Planet to help rule over the earth. The members are:

Chitose Chieko (千歳千恵子, Chitose Chieko?) / Dark Aurite (ダークオーアイト, Dāku Ōuaito?) - A seventeen year old girl who is the student body president at Kawai High School. Chieko was childhood friends with Suzu, however, they rarely talk anymore. Her standard colour is gold. She transforms into her alter ego Dark Aurite and uses the power of Radiance.

Satomi Kyoko (里見京子, Satomi Kyōko?) / Dark Argent (ダークアージェント, Dāku Ājento?) - A eighteen year old girl who is the vice-president at Kawai High School. She stands by the president's side like a maid and understands her troubles the most. She becomes close friends with Akiko despite the Student Council and Defense Club's fued. Her standard colour is silver. She transforms into her alter ego Dark Argent and uses the power of the Wind.

Mako Nami (マコナミ, Mako Nami?) / Dark Perlite (ダークパーライト, Dāku Pāraito?) - A seventeen year old girl who is part of the student council at Kawai High School. She looks like a angel, and is as noble as an angel, but once she is made fun of, she turns into a snappy individual. Her standard colour is Pink (Pearl-like). She transforms into her alter ego Dark Perlite and uses the power of Flowers.

Thunder (サンダー, Sandā?) - Thunder is the evil mascot sent to earth and the commander of the Conquest Planet. She is both manipulative and harsh, quick to betray and hurt others for her own desires. She has a strong hatred for love, seeing it along with her lord as a "unnecessary emotion".

Lord Seifuku (主制服, Shu Seifuku?) - The main antagonist of the series and the ruler of the Conquest Planet. His appearance is currently unknown with only the image of a shadow inside a glass ball, and speaks to Thunder using a special communication device. He wants to conquer and rule over earth. Naming it "The Loveless World".

Loveless (ラブレス, Raburesu?) - The main monsters in the series summoned by the villains to battle the Pretty Cure. Unlike some other monsters, they are not made of objects, however are humans transformed into a evil ego of themselves because of their negative feelings.

Takayama-sensei (高山先生, Takayama sensei?) - A young teacher constantly being possessed by the creature Wombat, and is the Defense Club's adviser. She is a cheerful, young woman who dreams of becoming a respectable teacher to her students. She is also fairly timid and flustered prone.

Kinoshita Kouki (木下毅, Kinoshita Tsuyoshi?) - Kouki is a member of the Kawai High Press Club, and constantly seen persistently observing the Defense Club. Her goal is to get the "scoop" on Pretty Cure, but she always either fails or is distracted. However, it is revealed she knew who they were all along, actually a secret subbornate to Lord Seifuku.

Matsuno Takara (松野宝, Matsuno Takara?) - Takara is a member and photographer for the Kawai High Press Club. She is usually seen expressionless but when taking pictures she becomes very passionate. She is usually seen with Kouki on the hunt to get the "scoop" on Pretty Cure. However, it is revealed she knew who they were all along, actually a secret subbornate to Lord Seifuku.

Note: IMAGES ARE NOT MINE 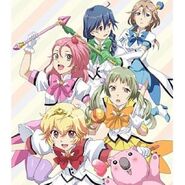 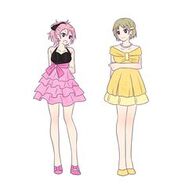 Retrieved from "https://fandomofprettycure.fandom.com/wiki/Earth_Defense_Pretty_Cure!?oldid=223291"
Community content is available under CC-BY-SA unless otherwise noted.