Dylas is the first enemy of Two Life Precure! , he is the main Love Interest of Kazesawa Sora.

Just like several other members of his guild, Dylas initially seems to be completely emotionless. he was always annoyed that pretty cure mainly defeated by cure feminine.

after he realized he had feelings for Sora against Zeref at the end of the episode. Dylas also won and returned actual human life and reunited with Sora.

Dylas is a fairly tall and lanky young man. He has silver-colored hair in a pompadour style. He wears silver designer glasses and a dark purple jacket with a flipped up collar, completed with a fur trimming. He wears a grayish shirt underneath the jacket that has a belt over it that wraps around his waist. He wears long black pants and blue shoes.

he is the most handsome boy in the group. he often let his handsome aura towards the cure, but always failed. real dream is to become a famous model and she just showed the real nature of a good, gentle, and understanding to Sora. 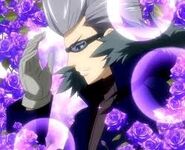 Dylas evil laugh
Add a photo to this gallery

Retrieved from "https://fandomofprettycure.fandom.com/wiki/Dylas?oldid=51197"
Community content is available under CC-BY-SA unless otherwise noted.