The Jewel Kingdom was defeated by the Fukushuu Zone. So, the Glitter Warrior of the Kindness, Cure Topaz, went with her fairy Pety on earth. Over there, she met a girl named Kokoro who become the Glitter Warrior of Passion, Cure Ruby. Topaz entrusted her Pety and returned to the Jewel Kingdom to find the Castle of Revenge King and save her Sister. In episode 2, Namino Miya transformed into Cure Sapphire and then Takara transformed into Cure Emerald DPC31

Akaino Kokoro: She is always happy and optimistic, always ready to help the others. It is the most popular of the school. She adores creating accessories and offering them to her friends. She is good at sport, at study (except in the Math) even if she hates working or doing homework. Her alter ego is Cure Ruby. She wears a pink dress with a light ribbon in the middle. Her introduction "The red heart of the passion, Cure Ruby! "(情熱の赤いハート,キュアルビー Jōnetsu no akai hāto, Kyua rubī). She fall in love with Revenge King.

Namino Miya: is the student council president!. But nobody asks for her help (because of Kokoro) .In the first episode, she was so jealous of Kokoro that she is transformed into a fukushuu .She is an intelligent girl endowed with a big wisdom. Her alter ego is Cure Sapphire. She wears a blue dress and a light blue ribbon in the middle. Her introduction " The blue heart of the wisdom, Cure Sapphire "(知恵の青心,キュアサファイアChie no ao hāto, Kyua safaia)

Yanashi Kira: She is the sister of Princess "Royal Amethyst" who was captured by Revenge King. Kira decided to save her sister. She is kind, optimistic. She was captured in the episode 12 then saved (Thanks to Ruby and Sapphire) in the episode 20. Her alter ego is Cure Topaz. She wears a yellow dress with a light yellow ribbon on the middle. Her introduction "The yellow heart of the kindness, Cure Topaz!" (優しさの黄色のハート ,キュアトパーズ Yasashi-sa no kiiro no hāto,kyua Topāzu!)

Seikatsu Takara: She comes from the Jewel Kingdom. The day of the attack of Fukushuu she left on earth forgetting all her past. It is the worst Precure of the history: she is clumsy with low attack in spite of all the efforts which she makes to become strong. Her alter ego is Cure Emerald. Her introduction: " the green heart of the life, Cure Emerald "(人生の緑のハートキュアエメラルド Jinsei no midori no hāto, Kyua emerarudo!)

Pety: is a dog-like fairy from Jewel Kingdom. She went on earth with Kira to find 3 other Precures and silvery crystals. She is very close to Topaz: They are friends since their childhood. She is always happy and greedy. Without her, no precure can be transformed. When Precure is transformed, she wears a small purple dress and a light mauve ribbon

Royal Amethyst: Jewel Kingdom. She is beautiful, charming. She was captured by Revenge king. (She is going to be saved in the episode 31.) She is in love with Revenge King

Fukushuu Duo: A group consisting of two people. They appear early in the season. To be able to create a Fukushuu,They have to combine their powers:

Thunder: He appears in the episode 3 of the season. He is powerful: He fights with flashes of lightning

Kowain: He is a young boy: white Hair and he has ears of bat

Ghost: He is the leader of all the others. He appears in the episode 10. He is very powerful.

Revenge King: He is the prince of the Fukushuu. His purpose is to destroy precures and to take the silvery crystals. He(it) is connected with Kokoro (He always appears in front of her under prêtexte to steal him(her) the silvery crystals) and he will fall in love with her.

To create Fukushuu, they have to say:

" Go out from there and comes to avenge you, Fukushuu!!! "

Diamond Brooch: is the item the Diamond Precure use to transform into PreCure. At the beginning, Pety sends Diamond Brooch towards the heart of precures. Then, they say: ' Precure Diamond Power '

Heart Crystal : is the item the Precure use to transform into Super Elegant Form and perform attacks

Heart Pad: is the item the Precure use to transform into Super Elegant Form and perform "Rainbow Heart Crystal"

Diamond Precure Movie: Halloween of Precure! A ghost among us! 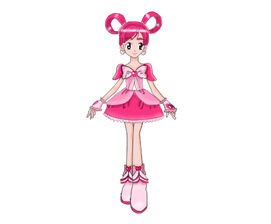 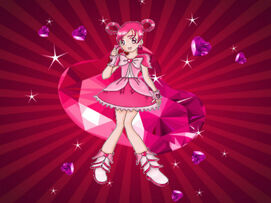 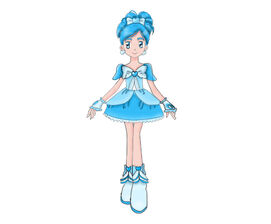 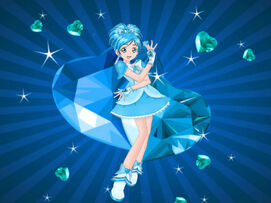 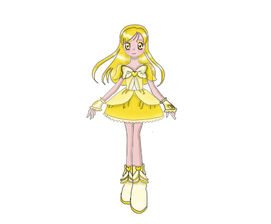 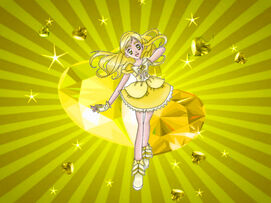 Add a photo to this gallery
Retrieved from "https://fandomofprettycure.fandom.com/wiki/Diamond_Precure!?oldid=223282"
Community content is available under CC-BY-SA unless otherwise noted.