Dia Tiffany is one of the main antagonists in Rainbow PoP! Pretty Cure!, but it was became a protagonitst in a sequel, Rainbow PoP! Pretty Cure! Spectrum Sparkle!. Dia, known as Princess Diamond Goldlord. She was powerful, but it was became an android, being she was sweet, happy and kind at first, she was now a pale, lifeless and depressed. She was abused and brainwashed and becomes Samara as the former main antagonist before it was killed. Samara was a monster humanoid, who was Valor's daughter and part-timer and the strongest general assistant. She was not know if who she is. She was looks weak and emotionless. When she first meets Natalie, she is still spying the pretty Cure as Loretta Matte. Her emotions are later developed to returned her into human and restore her memory, and she changes her heart and soul. She was a weak girl but she was strong with full of potential strength.

Her pretty Cure ego is Cure Alexandrite, the rainbow of Emotions, holds the power of Universe and the Light.

Dia is sweet, happy and kind, who can understands her past and future and she wishes that her love and peace that may came. She is strong and kinetic. Dia was always loves her family and friends and is bubbly-like personality. She loves wants and needs because she likes to something use or eat anything that she seems happiness.

When she was Loretta, she was completely opposite. Sadistic. Hatred. Weak. Loretta hates to see somethimg happines that come up to her life. She is arrogant and sharp, and can kill any love ones that causes biggest troubles. She has a bond with her enemies and create the unexpected disasters. She can analyze the past and future of the La Purisma. She can be stubborn and stupid sometimes.

"Color of the universe! Cure Alexandrite!"

Cure Alexandrite (キュアアレキサンドライト, Cure Alexandrite?) is the pretty Cure form of Dia. She represents the rainbows of Emotions, holds the power of Universe and the Light. In order to transform, she needs the Crystal Lock and her Prism Keys. 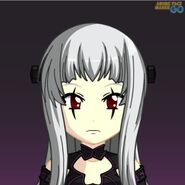 Samara
Add a photo to this gallery

Retrieved from "https://fandomofprettycure.fandom.com/wiki/Dia_Tiffany?oldid=286729"
Community content is available under CC-BY-SA unless otherwise noted.