The red heart is born! Cure Ruby! (赤いハートが誕生します！キュアルビー! , Akai hāto ga tanjō shimasu! Kyua Rubi?) is the 1st episode of the season Diamond Precure, and also the episode of the Pretty Cure franchise overall. It introduces the heroines Akaino Kokoro to the mascot Pety, and she gains the power of Pretty Cure. In the French Dub, this episode is called "Amour et Passion! Je suis Cure Ruby" (Love and Passion! I am Cure Ruby)

Kokoro is always happy and optimistic. She knows how to encourage and to motivate a team. This is the reason why everybody asks her for help. This provokes the hatred of the student council president, Miya who was transformed into Fukushuu and attacked Kokoro. But fortunately Topaz saved her at the beginning. Suddenly, Fukushuu captured her. Kokoro tried everything to save her. Then, a pink heart appears in her body and then with Pety she transformed into a Cure. Topaz asks her to find 2 other Precures.

After the defeat of Jewel Kingdom, Fukushuu decided to go on earth to absorb more hatred. But Cure Topaz followed them and went on earth. But meanwhile, a girl discovers that she can save the world when she tries to save Cure Topaz.

Elsewhere, Miya looked at Kokoro who was playing the baseball with Nagisa and Haruka. Hogora approaches Kokoro and tells her that he has a big problem in the club of soccer. Kokoro, rushes without hesitating to the ground. She finds a boy who was seriously injured. So, she hurries to help him and look after him. Then Emi asks Kokoro to help her to organize the Fashion Show. Then it was the club of theater that asks for help.

In the afternoon, Kokoro met Miya who told her: " all this hatred and this sadness is your fault ". On the way back, Kokoro who thought about Namino, heard a strange voice behind a tree. It was the fairy who cried. She turned to Kokoro and asked her to save Cure Topaz. Even if she doesn't understand nothing, Kokoro embrace Pety . Suddenly, a Fukushuu appeared. 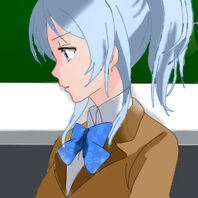 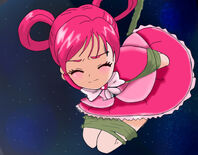 Goodbye Topaz
Add a photo to this gallery
Retrieved from "https://fandomofprettycure.fandom.com/wiki/DPC01?oldid=222982"
Community content is available under CC-BY-SA unless otherwise noted.