Blossom Pretty Cure (ブロッサムプリキュア Burossamu Purikyua) is the first series by Burstygummy (though I made 2 series before in my book). The themes are flowers and love. It has friendship and romance as the genre.

Kibouhana Kingdom was attacked by Shibonda Kingdom. They tried to take the Flower Crystal and changed every Kokorotane's people into Kurotane to summon Gaichu. Cure Cologne and Prince Nohara tried to escape with the Flower Crystal, but it fell to Earth and broke into many pieces. Fortunately, Princess Sakura sent Seed to search for the legendary warriors, Blossom Pretty Cure.

Harumi is a 14 years old girl. She is a cheerful girl and a flower maniac. She is bad at studying and sport but is not so bad. She is a student at Shushi Junior High School. Her catchphrase is “Lalala~”. She builds friendship with many people. As Cure Spring, she represents love and holds the power of flowers. Her weapon is the Heart Melody. Cure Spring’s catchphrase is, “Haruno no merodi no tanoshi, Kyua Supuringu!”. It means “The joy of spring melody!”

Cho is a 14 years old girl and was Princess Sakura’s bodyguard. She is cold and has a tsundere side. She is good at studying and not very good at sport. She is a new student at Shushi Junior High School. She became friends with the others because of Harumi. As Cure Cologne, she represents elegant and holds the power of butterfly. Her weapon is the Flower Wizard. Cure Cologne's catchphrase is “Furai to utsukushi-sa o o todoke shimasu!". It means "I will send beauty and fly!".

Minami is a 14 years old girl. She has high justice and is very tomboyish. She learns karate at Megumareta Dojo. She is bad at studying and good at sports. She is bad at fashion too. She is a student at Shushi Junior High School. She is Harumi's best friend and Aikyo's rival friend. As Cure Splash, she represents joy and holds the power of water. Her weapon is the Bubble Blow. Cure Splash's catchphrase is “Kyōryoku-ha jiyū no shōchōdesu!”. It means “Strong wave is symbol of freedom!”

Aikyo is a 14 years old girl. She is shy, calm and kind. She believe in fortune. She learns karate at her family’s Dojo. Even though she learns karate, she’s good at ballet too. She is home-schooled because her parent are over protective. She is Harumi’s childhood friend. As Cure Lucky, she represents luck and holds the power of the leaf specially the clover and the wind. Her weapon is the Clover Fans. Cure Lucky's catchphrase is “Rakki! Mottomo kōun'na shunkan wa kōundesu!”. It means “Lucky! The luckiest moment is be luck!”.

Seed is a male mascot. He is funny and energetic. Like Coco and Nuts in Yes! Pretty Cure 5, he can change into a human. He loves Aikyo and builds a relationship with her. He end his sentences with “~do”.

Love is a baby mascot and Seed’s sister. She is so cute and give powers to the Cures. Her happiness can give power. She can’t talk clearly.

She is a princess in Kibouhana Kingdom. She is kind and tomboyish (but Minami is more tomboyish than her). When Kibouhana is attacked by Shibonda, Queen Fall jailed her. But Princess Sakura believes that Cure Cologne will save her together with the other Cures.

Nohara is Sakura’s brother and Cologne’s childhood friend. He escaped with Cure Cologne.

She is Cho's  grandma and lives on Earth. She is so wise and tells what the Pretty Cure should do.

He is Harumi’s boyfriend. He was saved by Cure Spring when almost attacked by Gaichu and know Harumi’s identity. He tried his best to not be jealous at Harumi though he is. He is the captain of the soccer club and is Minami's friend.

He is the captain of Trio Shibonda. He hates flowers and loves deserts more. He is so selfish and always said he is the strongest. He is about 20 years old.

She is a member of the Trio Shibonda and is the only woman. She likes Sabaku but he ignores her and it happens under the peach tree. That’s why Kozui hates plants, specially trees. She always smiles but there is something behind her smile. She is about 18 years old.

Suna is a member of the Trio Shibonda and is the youngest. He controls sand. He is sensitive and likes to get angry. He was called “Suna – chin” by Minami the first time he met her and he has crush on her. He is about 14 years old.

Moyasu isn’t one of the Trio Shibonda but she is a villain too. She is Kozui's younger sister. She is selfish and likes to use her power to do anything she likes. She is the only one Shibonda who is close with the other Cures and even wants to be a Pretty Cure though she can't. But, finally she becomes kind.

Gaichu is the monster of sorrow and ends its words with “~chu”. (it’s better than ‘gai’, I think)

Flower Power is the transformation device. It looks like a heart bottle perfume with a heart mold in the center. The Cures shout “Pretty Cure, Blossom My Heart!” to transform.

These are the 4 main HFC and it’s out from the Pretty Cure’s heart. The color determines the owner, example: Pink belong to Cure Spring, purple belong to Cure Cologne etc.

Cure Cologne’s weapon. Its appearance is similar to the Moonlight Tact. The upgrade is Blow Flower Wizard and it turns into a flute. Cure Cologne’s attacks are Miracle Wizard, Elegant Melody, and Flower Power Miracle Bang!

Cure Splash’s weapon. Its appearance is like z stick with 3 round things on one of the ends. The upgrade is Bubble Blow String and it turns into a guitar. Cure Splash’s attacks are Bubble Burst, Dramatic Boom! and Flower Power Miracle Bang!

The town in this series.

The kingdom where everything are flowers, places on clouds. 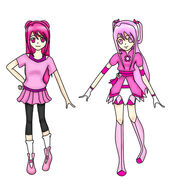 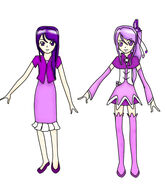 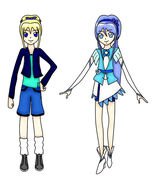 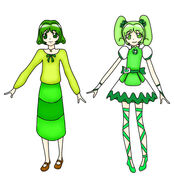 Add a photo to this gallery
Retrieved from "https://fandomofprettycure.fandom.com/wiki/Blossom_Pretty_Cure?oldid=226489"
Community content is available under CC-BY-SA unless otherwise noted.