Azuki Hoshiyama (星山愛月, Hoshiyama Azuki?) is a fanmade cure for Fairytale Pretty Cure! created by ♡Madoka-Chan♡. She is an unusually mature 12 year old who is quite shy and uneasy around others. Unlike the other cures, she attends Cozmica Academy, a special school industry for advanced learners. She takes college-level classes, causing her to be very smart, however, she can be quite forgetful...

Azuki's alter ego is Cure Kaguya (キュアカグヤ, Kyua Kaguya?), the Pretty Cure of Miracles and the Moon. Her cure name is based off of the fairytale called "The Tale of the Bamboo Cutter" aka "The Tale of Princess Kaguya"[1]. Azuki can often relate to the main character of the story as well.

Azuki is a shy and mature young girl, but she does have a couple problems focusing and remembering things. She is really smart for her age and a tiny bit clumsy, mainly because when her hair gets in her face, she can't see where she's going. So she cut her bangs a little and stuck a small hairclip in just for good measure. Some people think of her as strange or peculiar, but she doesn't mind them. Besides, all that matters is what she thinks, right?

Azuki really loves the nighttime. She loves it so much that sometimes she would stay outside hours after her normal bedtime just to look at the moon and hear the nighttime sounds. Sometimes she even feels that the moon is beckoning for her, asking her to come to it, as if it was her home. That is what fuels her secret desire of going to the moon one day.

Azuki has long, wavy jet black hair and brown eyes. Her bangs are kept out of her face by a single, dark-colored hairclip. She usually wears a long-sleeved dress with a blue collar and long black socks. Her shoes are black as well. And to add on to the look, she wears a blue ribbon with her collar.

As Cure Kaguya, Azuki's hair grows longer and turns a lilac color. Her eyes also turn a deep blue. The little hairclip that Azuki wears is still there, holding her bangs in place. Her outfit consists of a lilac crop top with a darker purple skirt. On top of the crop top she wears an even darker purple sailor collar and a purple ribbon. Her sleeves are rolled up to be super-short. Her boots are a little ways below the knee and they are of a purple color as well. Cure Kaguya accessorizes herself with a white headband, long star-shaped dangle earrings, and a white pearl choker. Also, she wears a pair of white wings to complete the look.

Cure Kaguya (キュアカグヤ, Kyua Kaguya?) is the Pretty Cure alter ego of Azuki. She controls the power of miracles as well as the moon, and transforms with the phrase, "Pretty Cure, Unlock My Story!". Her main attack is Moon Miracle, which she can only preform with her PreHeartBook.

First, Azuki's PreHeartBook appears. She opens it up and shouts, "Pretty Cure! Unlock My Story!" Then, the pages start to shine a lavender color. The pages fly out of the book and then look like a bunch of twinkling stars. The pages fly around Azuki and change her hair color from jet black to lilac and styles her hair in pigtails, as well as adding her headband. The pages then cover her head-to-toe and flash bright lilac, forming her Pretty Cure outfit. Azuki then snaps her fingers and sparks a glimmer of light that creates her star-shaped dangle earrings. The pages fly across the view and when they leave, Azuki's eyes are now a deep blue. Cure Kaguya, now finished transforming, jumps down and recites her introductory speech.

Cure Kaguya is named after the protagonist of "The Tale of the Bamboo Cutter", whose name was "Kaguya", the princess of the moon. 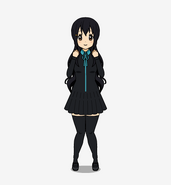 Azuki Hoshiyama in her school uniform 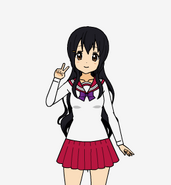 A closeup of ♡Azuki-Chan♡ in her school uniform 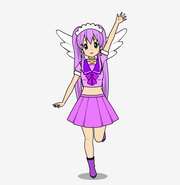 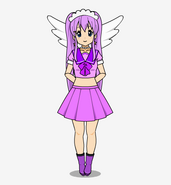 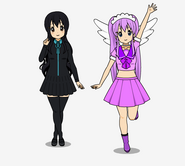 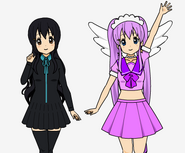 Retrieved from "https://fandomofprettycure.fandom.com/wiki/Azuki_Hoshiyama?oldid=274869"
Community content is available under CC-BY-SA unless otherwise noted.