Satoru acts aloof most of the time, never really paying attention and mostly being in his own mind. He has a talent for acting and is in the drama club, though it is unclear if he was forced into it or enjoys taking different roles. Despite how popular he is due to being in the drama club, he rarely shows his real emotions and thoughts. He is bored with his daily life, always looking for new things to amuse him and make his life less boring but never finds anything that really sticks. That is, until he becomes a Cure and finally finds something to keep him interested, moreover when he meets Doris and develops an interest in her, which later turns into a crush on the young police officer on which he only acts on while in his Cure persona.

As he lives together with two women interested in beauty and fashion and is an aspiring actor, Satoru takes good care of his appearance. It isn't unusual to see him with make-up, whether he applied it himself or his sister did it.

Satoru has short dark blue hair and silver-purple eyes. Typically, he is seen wearing a white jacket over a simple blue shirt, together with jeans and black boots that almost reach his knees. Sometimes, he carries a bag with him. Also, he has an earring in his left ear.

As Cure Phantom, while his hair doesn't change style, it changes to black. His outfit consists of a white shirt and grey trousers. Over the shirt he wears a short-sleeved black vest with a long tailcoat. Attached to it is a light grey tie and unlike the others, he doesn't have a bow attached to the backside of his outfit. Additionally, he wears white gloves and long white boots that go over his knees as well as a purple belt, to which the bag with the Special Lock is attached. Like the Cures before him, a long light grey cloth starting under his vest is part of the outfit. Lastly, he also wears a grey top hat.

In his family, Satoru is the middle child, between an older and a younger sister, however he only really grew up with his younger sister since by the time he could remember, his older sister had already moved out of the household. Their mother is a famous actress who seems to passed on her talent for acting to her only son as both her daughters don't show any interest in the business. Satoru was praised as a genius from early childhood and as nothing really posed a challenge to him, he became bored. He never understood why people thought his lifestyle was exiting. Since he was so bored with his life, he started looking for ways to make his life more exciting, which is when he started parkouring, which actually comes in handy in his work as a Cure. Still, Satoru never found anything that kept him interested besides acting.

Cure Phantom (キュアファントム Kyua Fantomu) is the Pretty Cure alter ego of Satoru. His symbol is the diamond and his theme colour is black. He transforms using the phrase "Pretty Cure Midnight Getaway!".

Phantom (ファントム) - is another word for ghost

Mimoto Miwa - Miwa approaches Satoru after seeing him at a performance with him in the lead role. At first, Satoru is uninterested in the girl following him around, subsequently bonding with Yumia over having to calm Miwa down. He becomes a Cure, meeting Cure Identity and Cure Nocturne and his life becomes more interesting suddenly. He finally befriends Miwa when she turns out to be his "boss".

Nakajima Yumia - Yumia and Satoru bond over having to calm down Miwa, but get closer when they start working together as Cures. Yumia mentions that he reminds her of another friend of hers.

Safe - Safe and Satoru stick together whenever they see each other, 'escaping frome the girls' as they call it. When Satoru starts to get closer to Doris, Safe feels left behind but in the end they come to an understanding.

Doris Evans - Satoru and Doris start crushing on each other shortly after their first meeting. While Doris seems to return the affection when speaking with Satoru, she dislikes Cure Phantom flirting with her. Still, he continues as he likes her reactions. 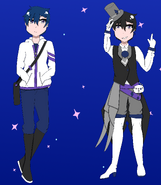 Satoru and his Cure form, Cure Phantom
Add a photo to this gallery
Retrieved from "https://fandomofprettycure.fandom.com/wiki/Azamugawa_Satoru?oldid=280938"
Community content is available under CC-BY-SA unless otherwise noted.