Aizora Megumi just started middle school. She knows no one in school, but quickly makes a new friend, Amai Yuka. She meets Hoi, a fairy from the Colorful Kingdom. She becomes Pretty Cure, and is told there are 5 all together. Megumi doesn't want to put her new friend in danger, so what will she she do? Who will she get to become the next Cure? 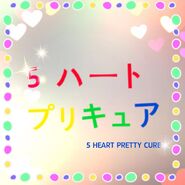 The logo for the series.
Add a photo to this gallery
Retrieved from "https://fandomofprettycure.fandom.com/wiki/5_Heart_Pretty_Cure?oldid=54706"
Community content is available under CC-BY-SA unless otherwise noted.